The fighter jet got damaged after a drunk officer of the Ukrainian Air Force drove his Volkswagen Touran into the fighter jet at Vasylkiv Air Base. 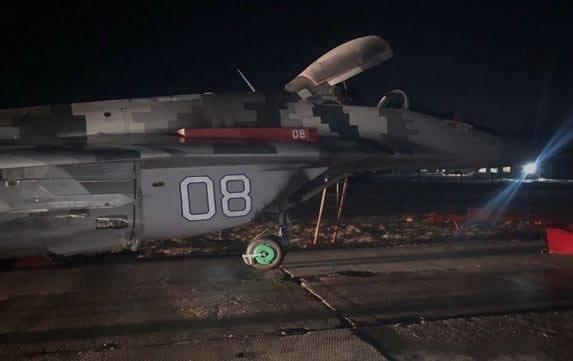 (DEFENCE SECURITY ASIA) — On late Wednesday, a Ukrainian Air Force MiG-29 fighter jet from the 40th Tactical Aviation Brigade sustained damage when a Volkswagen Touran collided with it at Vasylkiv Air Base.

Photos circulating on the internet show one of the burned engines of a fighter jet and a damaged car. Ukrainian military officials said that the fighter plane has been transporting using a tractor to the place of his parking when the car collided with the tail of the fighter.

Local media on March. 12, reported that the MiG-29 with tail number 08 WHITE (c/n 2960731239) got damaged after a drunk officer of the Ukrainian Air Force drove his Volkswagen Touran into the fighter jet at Vasylkiv Air Base. As a result of the collision, the military plane caught fire.

On this fact, the military prosecutor’s office of the Kyiv garrison began a pre-trial investigation in criminal proceedings No. 42021110350000030 per the criminal offense under Part 3 of Article 411 of the Criminal Code of Ukraine.

The Ukrainian Cities: The Centre Of Gravity In The Russia-Ukraine War