The destroyer's routine transit will definitely inflame the already tense relationship between Washington and Beijing especially on the issue of Taiwan. 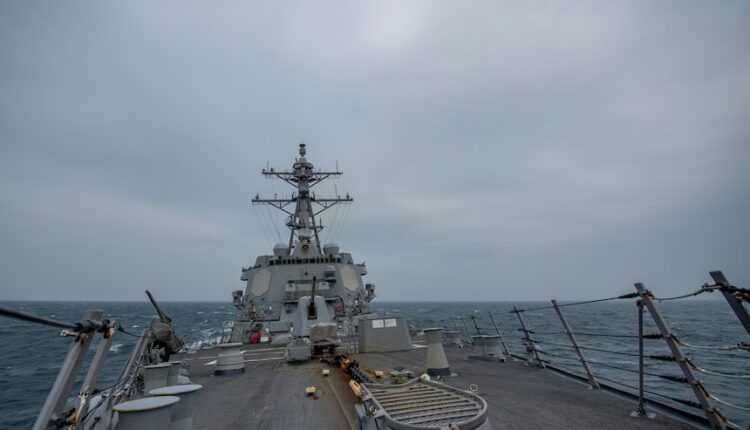 (DEFENCE SECURITY ASIA) –A U.S. Navy destroyer conducted a Taiwan Strait transit today, continuing a recent push for the Navy to operate between mainland China and the island it claims.

USS John Finn (DDG-113) conducted the routine transit today, which the Navy says “demonstrates the U.S. commitment to a free and open Indo-Pacific. The United States military will continue to fly, sail, and operate anywhere international law allows,” according to a U.S. 7th Fleet statement. John Finn is part of the Theodore Roosevelt Carrier Strike Group that is operating in the Pacific. According to the USNI News Fleet and Marine Tracker this week, the carrier had been operating farther south, in the Celebes Sea between Indonesia and the Philippines. John Finn separated from the CSG at some point, sailing north ahead of today’s Taiwan Strait mission.

7th Fleet released photos and video from the strait transit that showed an MH-60R Sea Hawk helicopter from the “Magicians” of Helicopter Maritime Strike Squadron (HSM) 35 taking off from and landing on the DDG’s flight deck during the transit. Recent strait transits have been performed by two Japan-based U.S. destroyers. On Feb. 24, USS Curtis Wilbur (DDG-54) transited the strait. On Feb. 4, USS John S. McCain (DDG-56) did the same. On Dec. 31, both McCain and Wilbur together performed a Taiwan Strait transit.

After both February transits, the Chinese military said it was not only watching the U.S. ships but on high alert during the operations, which the Chinese government said it “firmly opposed.”

Neither the People’s Liberation Army nor the Chinese government appear to have commented yet on today’s transit.