Visiting Israeli Foreign Minister Yair Lapid and Nasser Bourita, his Moroccan counterpart, signed off on Wednesday on an air service agreement between the North African kingdom and the state of Israel and an agreement to cooperate in the fields of culture, sport and youth. 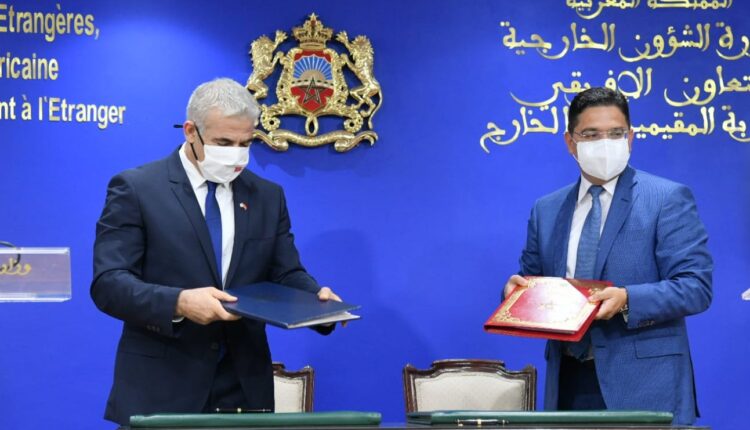 (AL JAZEERA) — The foreign ministers of Israel and Morocco are taking a new step towards strengthening ties between the two countries, signing three accords less than a year after agreeing to normalise relations.

Visiting Israeli Foreign Minister Yair Lapid and Nasser Bourita, his Moroccan counterpart, signed off on Wednesday on an air service agreement between the North African kingdom and the state of Israel and an agreement to cooperate in the fields of culture, sport and youth.

They also signed a memorandum of understanding on the establishment of a political consultation mechanism between their countries’ foreign ministries.

It was not immediately clear what such a memorandum would encompass but appeared to fit into the wider design of the face-to-face diplomacy during Lapid’s two-day visit to Morocco.

The trip will be capped on Thursday by the inauguration of Israel’s liaison mission in Rabat, the capital.

Israel and Morocco agreed in December to resume diplomatic relations and re-launch direct flights under a deal brokered by former US President Donald Trump. As part of the agreement, Washington also recognised Moroccan sovereignty over Western Sahara, where there has been a decades-old territorial dispute with Morocco pitted against the Algeria-backed Polisario Front, a movement that seeks to establish an independent state in the territory.

Morocco’s foreign minister told his visiting Israeli counterpart that their countries’ newly upgraded ties would bring economic benefits, and urged him to work towards a two-state solution to the Israeli-Palestinian conflict.

“Our ties with Israel are unlike any other ties,” Bourita, standing alongside his Israeli counterpart Lapid, told reporters on Wednesday, saying that Morocco’s Jewish heritage was a core component of its identity.

Regarding the Palestinians, Bourita said, “There is a need to restore trust between all parties … and refrain from fuelling tension in order to pave the way for a political solution based on the two-state solution.”

Lapid’s visit is the first to the country by an Israeli minister since 2003, and the first such meeting in Morocco since the US-brokered “Abraham Accords” with four Arab states: the United Arab Emirates, Bahrain, Sudan and Morocco.

Palestinian officials have slammed the normalisation deals, saying Arab countries have set back the cause of peace and are perpetuating Israeli occupation by abandoning a longstanding demand that Israel gives up land for a Palestinian state before it can receive recognition.

A statement from the Israeli foreign minister on Wednesday said the agreements “will bring our countries innovation and opportunities for the benefit of our children – and their children – for years to come.”

Israel and Morocco are teaching children about “the power of hope” in a world “that has shrunk,” Lapid’s statement said.

He is slated to become prime minister in 2023 under Israel’s eight-party coalition government.

Israel and Morocco share a long history of formal and informal ties. Many Israelis have a lineage that traces back to Morocco, which is still home to a small community of several thousand Jews.